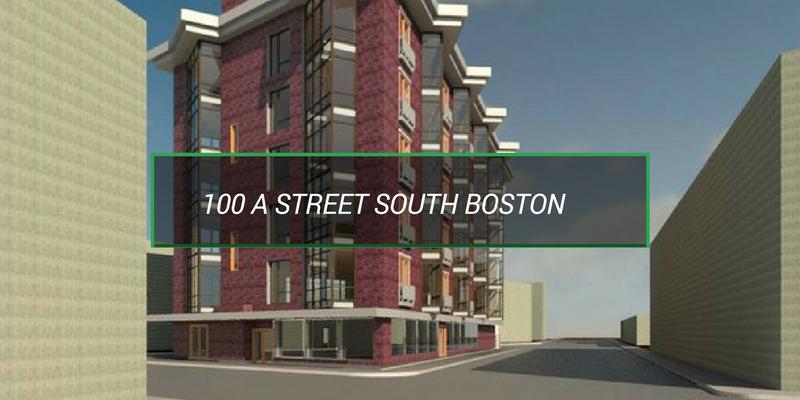 One of the newer luxury properties to hit South Boston is 100 A Street, a six-story luxury condo developed by Michael Moor. Featuring spacious units, space for a coffee shop or cafe, and a parking garage, this happens to be one of the only luxury buildings to offer both two- and four-bedroom condos. Square footage ranges from 1,700 to 1,800 square feet. This nine-unit luxury condo is primed to sell and move fast. The entire building is set at a little over 21,000 square feet at six stories high, zoned for commercial use on A Street. There's a five-car enclosed parking lift as well, bringing the total spaces available to 10. There is an option of an additional eight spaces to rent at nearby Channel Center Garage.

This building is currently under construction, offering one four-bedroom penthouse at 3500 square feet. This amount of space in a city area is unheard of! The land was formerly occupied by Williams Tavern and My Diner. Featuring a common roof deck and one private roof deck, this building is being constructed on a triangular site at the corner of A and West Third and West Second Street. A Street has certainly seen a lot of changes over the last few years, with the addition of the State Street Building, 900-plus car garage, and two developments: 100 A and 69 A, according to Caught in Southie.

People love living in this area of Southie for its vibrant arts community featuring an extensive population of working artists. The area is also known for its many local diners, coffee shops, fancy restaurants, boutiques and more. Everyone loves the nearby beaches, especially the family-friendly one located at the Curley Community Center. Mayor Walsh has vowed to make much-needed upgrades to South Boston’s infrastructure over the coming years, including street paving projects. Look for a refresh at Medal of Honor Park, which is slated to receive a multi-million dollar renovation, with renovations planned for many other area parks, according to Boston.gov.

Property values in around A Street are now some of the highest in Boston. Prices do vary depending on the size, style and luxury level, as well as if the property is considered waterfront or not. It's truly a seller's market, with condos in South Boston spending less than one month on the market -- most less than a week. That means interested buyers must be prepared to put in an offer fast -- either at or above asking price in order to qualify for an acceptance. Many people these days, desperate to secure a property in this up and coming area, are even waiving the mortgage and inspection contingencies in order to get what they want.

A Little Bit About the Area

Known as Southie, South Boston is a densely populated neighborhood that's really been taking shape lately in regards to the luxury condo market. Chock full of history and tradition, South Boston offers panoramic views of Pleasure Bay. It's popular with young professionals and families due to the proximity to the rest of the city and Boston proper. It also happens to be home to many historic sites, such as the national park, Dorchester Heights, as well as Fort Point. From beaches to parks to organic markets, there's a lot to love about South Boston. There are several revitalization efforts underway in these neighborhoods that make 100 A Street a desirable piece of property. As a result, real estate prices have been on the rise over the past several years in keeping with this demand.

Williams Tavern and My Diner had both been fixtures in this neighborhood for years. The tavern was a decades-old bar in South Boston (first opening in the 1940s), shutting down last year to make way for construction of 100 A Street. It was owned by Bob DeSimone, who finally decided it was time to sell after experiencing ongoing health problems since 2003. My Diner also closed, as it was housed in the same building slated for demolition. However, there is a light at the end of the tunnel for this business.

My Diner reopened in its original neighborhood back in February of this year on First Street. Guests can take an elevator or stairs to the first floor or enter from East Second Street using a ramp.

For now, the ghost of My Diner and Williams Tavern will live on at 100 A Street, breathing new life into the area with luxury condos appealing to young professionals and growing families eager to be close to all the amenities of Southie.

To learn more about 100 A Street in South Boston or to schedule a showing with us, please contact Home Town Brokerage at 617-877-1479 or email us at info@htbrealty.com.