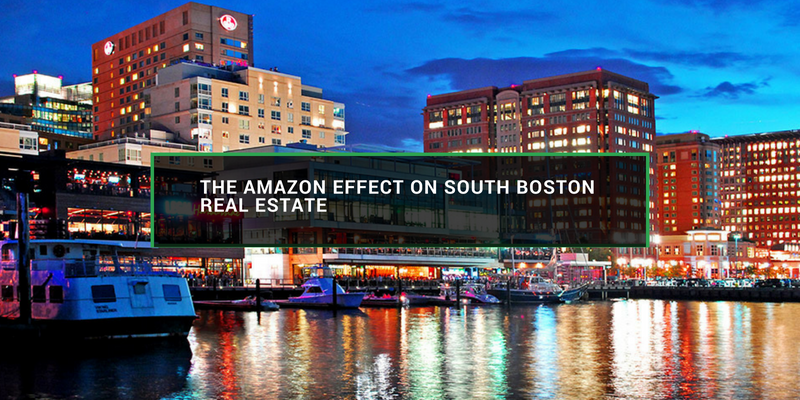 You've likely heard by now that Amazon will be leasing office space overlooking the Seaport’s future Harbor Square. Online marketplace giant Amazon has been trying to get into the South Boston real estate scene for some time now, and they're striking while the iron is hot. The Seaport District is where they are negotiating to lease 430,000 square feet of space scheduled to undergo design review this month on the 17-story office, says Boston Business Journal.

The architect for the project is Gensler San Francisco and the landscape architect is James Corner Field Operations of New York. Their goal, according to reports, is to harness emotions that are authentic, human-focused and memorable as they embrace their integrative design concept. They are to present their design to the Boston Civic Design Commission this month.

While the ink is barely dry on their announcement from May 1, speculation is already running wild on what this addition will do to the city in general and the South Boston real estate market in particular. With prices already sky high with the addition of several luxury condos throughout the Seaport, many are wondering what the fallout -- good and bad -- will be from the so-called Amazon effect. Amazon has the ability to attract other companies also looking to tap into that talent. As a result, they build offices and retail spaces in that immediate area in order to reap the benefits; however, supply starts to become a challenge.

Take Seattle, for instance. Amazon occupies more office space in that city than the next 40 largest employers in Seattle combined, points out Fortune. Rent has increased exponentially in neighborhoods that have the biggest influx of Amazon workers -- in fact, 65 percent faster over the past five years. Overall, Seattle rental prices have increased by 50 percent and home values doubled since Amazon started out their flagship operation there as a book seller in the middle 1990s.

Amazon is also looking to increase its reach in Vancouver, boosting the workforce there five-fold to 5,000 by the year 2022. This is great for business but not so great for those looking to buy a home in the area. Vancouver's market is already strained, with a supply of available rentals sitting below one percent for the last three years, with the price of a standard home rising 91 percent in just 10 years.

In the new Seaport building, Amazon plans to employ about 2,000 people, with this lease filling the planned building to capacity. Its location on Seaport Square Parcel L4 sits on the corner of Autumn Lane and East Service Road. It will feature 81,000 square feet of retail space and amenities on the first two floors.

Construction is set to begin by the end of the year, with full completion by 2021. Amazon has an option to lease more space across Harbor Square on Seaport Square Parcel L5, situated on the corner of Congress St. and Boston Wharf Rd. This option will expire at the end of 2020, prompting Amazon to add at least 2,000 more people to its workforce.

Don't get confused by Amazon’s Seaport office. This has nothing to do with the company’s high-profile search for a second headquarters. As of now, Boston is only one out of 20 finalists.

Contact Home Town Brokerage to learn more about Seaport’s future Harbor Square at 617-877-1479 or email us at info@htbrealty.com