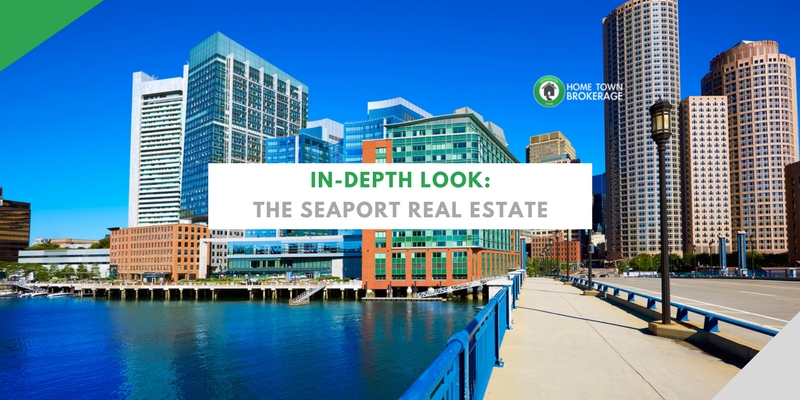 Seaport real estate is thriving. Not only that, it's surpassing the traditional costly areas of Boston (think Back Bay and Beacon Hill) as having the most expensive and luxurious condos in the whole city. In fact, this gorgeous stretch of pristine Boston waterfront, also known as the Seaport/Innovation District, claimed the highest condo sale prices in 2016, according to Boston.com, projected to stay steady right through 2018.

The average Seaport condo sale for that time period was $2.3 million -- more than double the $1 million average for Beacon Hill and a million more than the Back Bay’s average $1.2 million sale price. So what's the deal?

Fueling the recent hike in Seaport prices have been a series of sales along the waterfront, such as the posh 22 Liberty, 50 Liberty, Pier 4, 150 Seaport Boulevard and Echelon Seaport, this last one being a 1.33 million-square-foot development that will become the neighborhood's largest single amount of for-sale housing, says the Boston Globe. It's no secret, then, that residing in the Seaport District is becoming more and more cachet, due in large part to its killer harbor views, speedy access to the T and surrounding highways, and eclectic immersion in the culture that contributes to the allure of the city.

As such, developers are scrambling to invest in Seaport real estate. As a result, an unprecedented number of condos is slated for construction over the next two years. Ultra luxury projects such as 22 Liberty are taking their inspiration from posh establishments like the Mandarin, which opened just eight years ago in the Back Bay. With a cavernous lobby, 24-hour concierge, valet, fitness center, and sweeping outdoor views, condos like 22 Liberty are causing trend lines to jump.

The average asking price for listings currently on the market in Boston’s Seaport District are at about $1,500 per square foot, compared with $996 per square foot for properties along the city’s North End Waterfront, according to Curbed. Both neighborhoods are characterized by deeply historic neighborhoods -- mainly the North End and South Boston, with these higher prices reflecting a fundamentally different product type as a result of different zoning requirements. Unlike the North End, which is populated by historically varied homes and waterfront condos, the Seaport boasts predominantly new luxury condos asking a premium price. That being said, you still see variety in home prices in the Seaport, with more affordable units located in Fort Point that have been converted from historic buildings offset by pricier new developments going up along the seashore, such as Echelon.

Bottom line is, Seaport real estate is thriving and in order to get in on the ground floor, the time to act is now. Call Home Town Brokerage today for more information and showing appointments at 617-877-1479 or email us at info@htbrealty.com. We are an independently owned real estate agency helping buyers and sellers throughout Boston and its suburbs find the house or condo they really want.